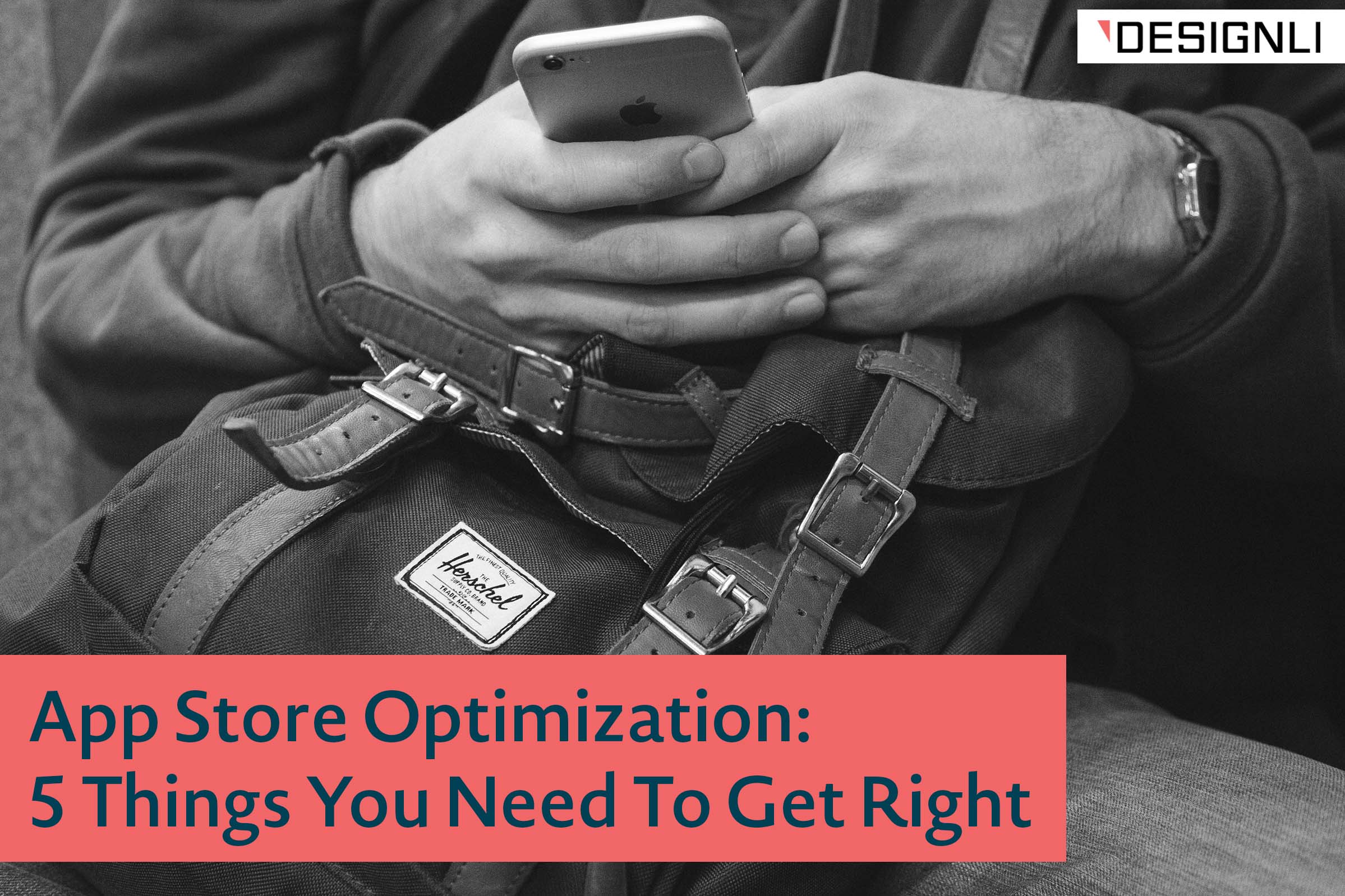 The App Store and the Google Play Store have both become pretty crowded places in recent years. If you’re an entrepreneur or a developer joining the mobile party by launching a new app, you need to know how to stand out in the marketplace. That’s where ASO – app store optimization – becomes your best friend.

According to Google and other sources, at least a quarter to as much as a half of smartphone users discover new apps directly in the app stores. And with over 2 million apps available, there’s a lot riding on getting your app search optimization right. Properly executed ASO can get your app in front of the people you want and entice them enough so they’ll happily download it.

ASO shares a lot of similar ideas to it’s older sibling, SEO – search engine optimization. But here, there’s a much smaller set of elements to get right. So, instead of managing a content marketing initiative to produce backlinks or optimizing your site’s caching to increase rendering speed, it’s a much more subtle and refined game.

The ultimate goal of ASO is to drive targeted and relevant potential users to your app so they can do the one thing that you set out to do in the first place: download and enjoy the app you spent so much time and effort building. If you’re not optimizing for app search, you’re missing out on a ton of potential downloads.

So now let’s look at what affects ASO and how to get each thing right.

Understand the Language of Your Target Audience

The foundation of good ASO is hopefully something you’ve already spent countless hours doing: understanding who your target users are and what kind of language they use naturally.

This information is essential and impacts pretty much all of your ASO strategy going forward. Neglecting it is just wasting time and effort (and of course, downloads). So, if you don’t already have audience or user profiles, you need to carve out some time to carefully think about how those that you want to download your app would do so.

Put yourself in their shoes. Get into their head. Think about what they’re looking for and why they’re looking for it. You want to be there when they type their query into the search bar. What do they type? What might catch their eye once they tap the search button? What unique quality, that essential thing you perfected in the design and development of your app, are people craving?

On a similar note, it’s fruitful to understand those apps that are your competition. Learn what kind of language they use. What are the names of these apps? What do they have in their description? Which keywords are they using? Build a few competitive profiles too so you don’t accidentally sound exactly like your competitors’ apps.

Place Keywords in the Name or Title of Your App

If your app does one thing, and one thing well, then it will be easy for you to understand what people are searching for and include that into either the name or title of your app.

There are plenty of very functional, utility type apps where the keyword is part of, if not all of, the name. Tiny Calendar, Smart Metronome, and Spending Tracker are examples of extremely targeted apps with names that follow suit.

If you choose a unique name, so you can build more of a brand around your app, then you still have space to inject some keywords into the title. While you don’t want to stuff all of your target keywords there, it’s expected now, that after the unique brand name of your app, there will be two or three targeted keywords. Now, even if the name of your app is unique people can still understand what the app is about and who it’s for.

Here’s where things begin to diverge depending on if you’re launching your app on the App Store or Google Play Store. There are two different approaches because of how much more experience Google has developing intelligent search algorithms.

On the App Store you have a 100-character keyword field that you can enter your target keywords into. Apple takes the title of your app and adds the keywords entered into the keyword field into account, using those terms for search. Simple enough.

Google Play is a little more sophisticated in how it generates keywords for your app. Since it’s Google, and Google no longer looks at meta-keywords for traditional SEO, there’s no keyword field for your app at all. Instead, Google intelligently parses keywords directly from your app’s description. So, when crafting the description, make sure to include the keywords you’re looking to rank for. But don’t act like it’s still 2002, stuffing every keyword you can in there. Keep it natural and conversational just like you do for traditional on-page SEO.

Regardless of which platform you’re launching your app on, you need to create a compelling description for it.

Here’s where all the research about your target market and your competition come into play. This is your chance to connect with your audience and tell them in plain language what your app does, who it’s for, and what kind of value it will bring them when they use it.

If you’re not a copywriter, don’t worry. Simply focus on pulling in the user with the first few sentences. Capture their imagination and their attention by focusing on how you can add value to their life. Once they know why they should use your app, and not any of your competitors, you can list out the individual features and more technical stuff if you feel the urge to.

Don’t be afraid to test different descriptions texts to see if one way of describing your app does better than another. If you update your app frequently (and you should) consider using that time to refine your description even further.

Ask for Feedback and Ratings

A large number of high ratings is an indicator of how valuable an app truly is. If you see hundreds of reviews and an app has between 4 and 5 stars, it’s a good bet. Less total reviews may not indicate anything is necessarily bad if the rating is still high. But, you and I both know that downloading a 2 or 3-star app is asking for trouble – buggy, ad-infested trouble.

You know you’ve built something that people will love, so ask for user feedback. Do so at just the right time and people may be encouraged enough – or thrilled even – to follow through with a rating. If you’re not asking for feedback, you’ll only ever be stuck with a low volume of reviews. It’s not a bad thing, but having a large number of them not only significantly helps with download volume, but improves your ASO too.

Modern smartphone users expect that apps will be continuously updated. Either fixing bugs or adding cool new features, apps tend to be living things – always being iterated on and improved.

It’s 2017 now. If a potential user sees that your app hasn’t been updated since 2015, they’ll likely think that it’s dead. We even have a term here at Designli: appsolescence. You might have a rock solid app that does what it does perfectly and never needs to be improved, but the average person won’t know that. It’s highly unlikely this is actually the case, so if you don’t want people to think you have a zombie app, fix some bugs, improve the UI, add some features, and enjoy the bump in downloads (and ratings!).

Definitely let people know in the new description what things you added or what you fixed so they see, again, that someone is “behind the curtain” maintaining the app.

There are a few other things that can indirectly help your ASO. Adding vivid screenshots, high-quality video, and a stellar icon. These all make your app feel premium and signals to your target audience that it’s actually worth downloading. More downloads mean more potential reviews, and more and higher reviews directly affect your ASO.

ASO is all about the details. Get the details right and you’ll have a better chance of meeting new users straight from the app store. Of course, ASO is only one of many strategies for gaining new users. You should also think about content marketing or developing partnerships with influencers on social media. But when it comes down to it, no matter how people find your app, the app stores are the last stops users make before downloading your app. If it’s difficult to find, or there seem to be clues that it’s not really what they’re after, you’re losing downloads. Make the finish-line easy to find and compelling enough for your target audience and you’re guaranteed to see a steady stream of downloads.

The Psychology of App Design: How to Help

What We Already Know About What’s Coming With

How to Build User Personas to Guide Product

6 Questions Startups Should Ask Before Building an

Explaining Your App with User Stories

How to Build an App to Help Users

5 Best Ways To Get Funding for an

Know When Paying for a Premium Domain is

How to Design an App That Fulfills Its
prev next