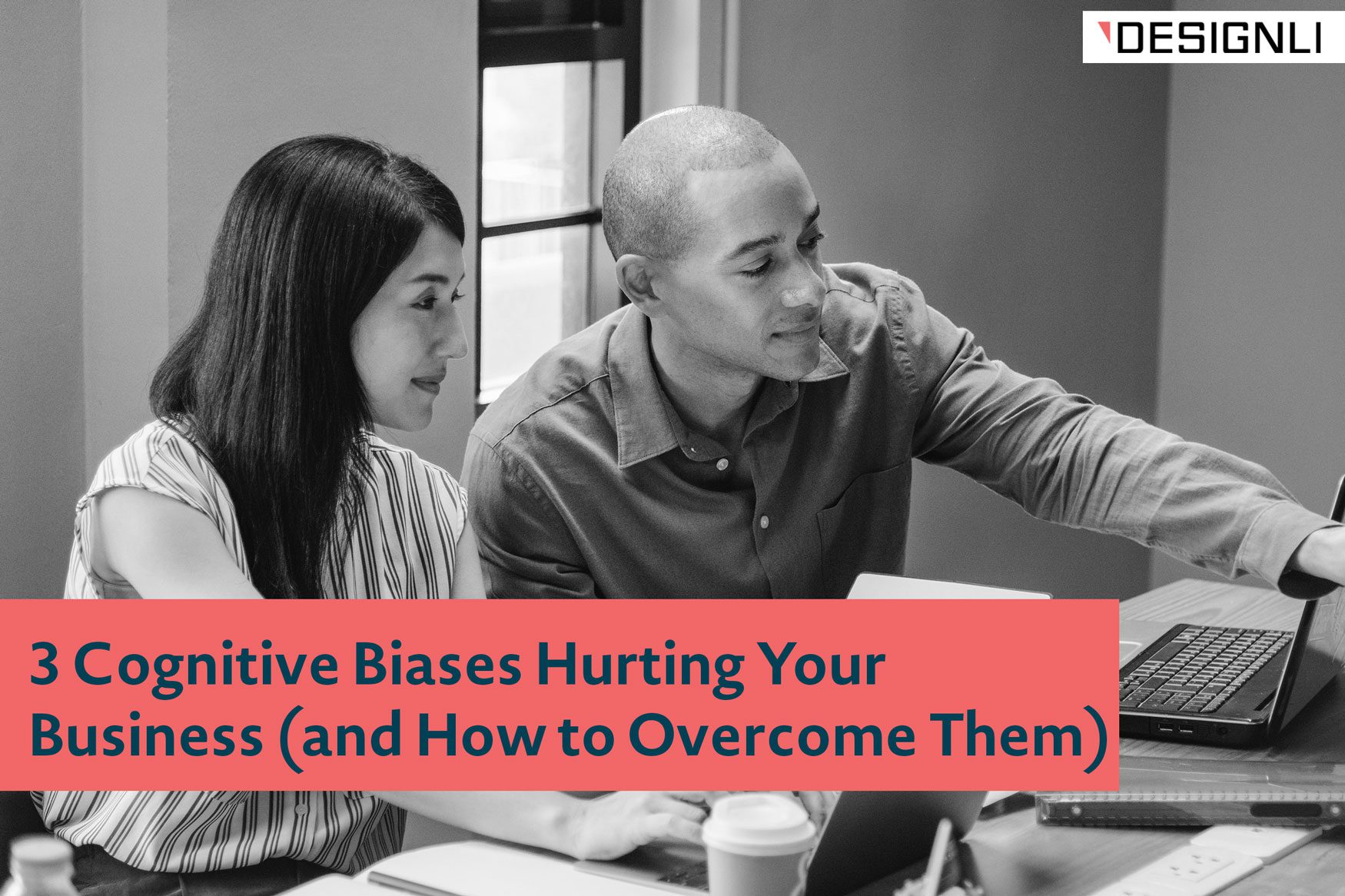 As much as we’d like to believe that we make decisions based on rational thinking, it’s just not the case. Daniel Kahneman’s pioneering research, much of which he conducted with Amos Tversky in the 1970s, showcases just how illogical humans can be. This irrationality is due to cognitive biases — the tendency to make decisions and take action based on limited information, overconfidence, self-interest, or attachment to past experience, rather than reality. The result is a distortion in perspective and inaccurate understanding that lead to bad decisions.

In business, we can’t afford to make bad decisions. One bad decision can have a cascading effect that easily leads to missed opportunities, wasted resources, or worse. Because we firmly believe that our biased way of thinking is reality, we need to be particularly aware of how cognitive biases influence us. In this post, we’ll look at three cognitive biases hurting your business and how to overcome them.

Because of the planning fallacy, we tend to predict that we’ll need less time to complete a task than we actually will. Interestingly, this phenomenon occurs regardless of our experience with similar tasks in the past. Even though we know the task has always taken longer to complete, we still underestimate the time the task will take in the future. This fallacy was proposed by Kahneman and Tversky in 1979, and they originally explained the tendency by suggesting that planners focus on the most optimistic scenario for a task, rather than using their experience of how much time the task requires. You’ve experienced the planning fallacy plenty of times, if you’re like most people!

Rather than relying on your ability to predict the length of time a project will take, use real data. Make time-tracking a habit to gather a history of data that reveals how long tasks typically take. When you’re budgeting time for a project, simply run a report that pulls the data for the tasks similar to those that the project involves.

Confirmation bias is the tendency to seek out, interpret, and recall information that confirms existing beliefs. People are prone ignore facts that don’t line up with what they believe, especially if those beliefs are deeply-held. They also tend to interpret ambiguous information as evidence backing up their position. You may have seen confirmation bias on display during an argument among friends — when each person sees a piece of evidence, they each became more entrenched in their original position. Many psychologists and a variety of studies have demonstrated this bias, and they suggest that confirmation bias can be explained by people’s tendency to avoid the psychological cost of having made a bad decision.

Confirmation is difficult to counteract because, by its very nature, it influences how we interpret data. But there are a few ways you can weaken its impact. First, you should always question the evidence that supports your position. Is it accurate? Is it scientifically verifiable? Next, seek out evidence that supports the opposing viewpoint and examine it for any truth it may hold. Finally, never rely on your own perspective alone. Listen to other, diverse perspectives for a fuller understanding.

Escalation of commitment, or the sunk cost fallacy, is the tendency to continue along a course of action, even when facing increasingly negative outcomes. Once we’ve invested a certain amount of time, energy, or resources into something, we continue investing with the blind hope that it will eventually pay off — despite strong evidence to the contrary. Escalation of commitment was first described by Barry M. Staw in 1976 and has since been studied by a plethora of researchers. Many of these researchers say that this fallacy is explained by the aversion to being wrong. People tend to justify the decision they made and don’t want to admit (even to themselves) that they were wrong.

Sometimes the old adage, “If, at first, you don’t succeed, try, try again,” is bad advice. Once you’ve invested in a course of action, it’s difficult to see things objectively. You don’t like the idea of having wasted resources, and you don’t like being wrong. In this situation, you’ll need to bring in an outside perspective. Find someone you respect who is knowledgeable and experienced in the area, and ask for an honest evaluation.

These biases are challenging to overcome, but awareness is the first step. When you stay alert to these biases in your own decision-making, you’ll see them more easily. Putting up the guardrails described above can help ensure you don’t get off track.

Thinking about a software project? Get in touch to chat about how to make it a reality.

« How Personality Frameworks Can Help You Understand Your App Users
Allan Symonette, Founder of Surcee, Shares His Mission to Promote Meaningful Giving »

Legal and Accounting for Startups: What Professionals Do

What to Consider Before You Start Developing an
prev next