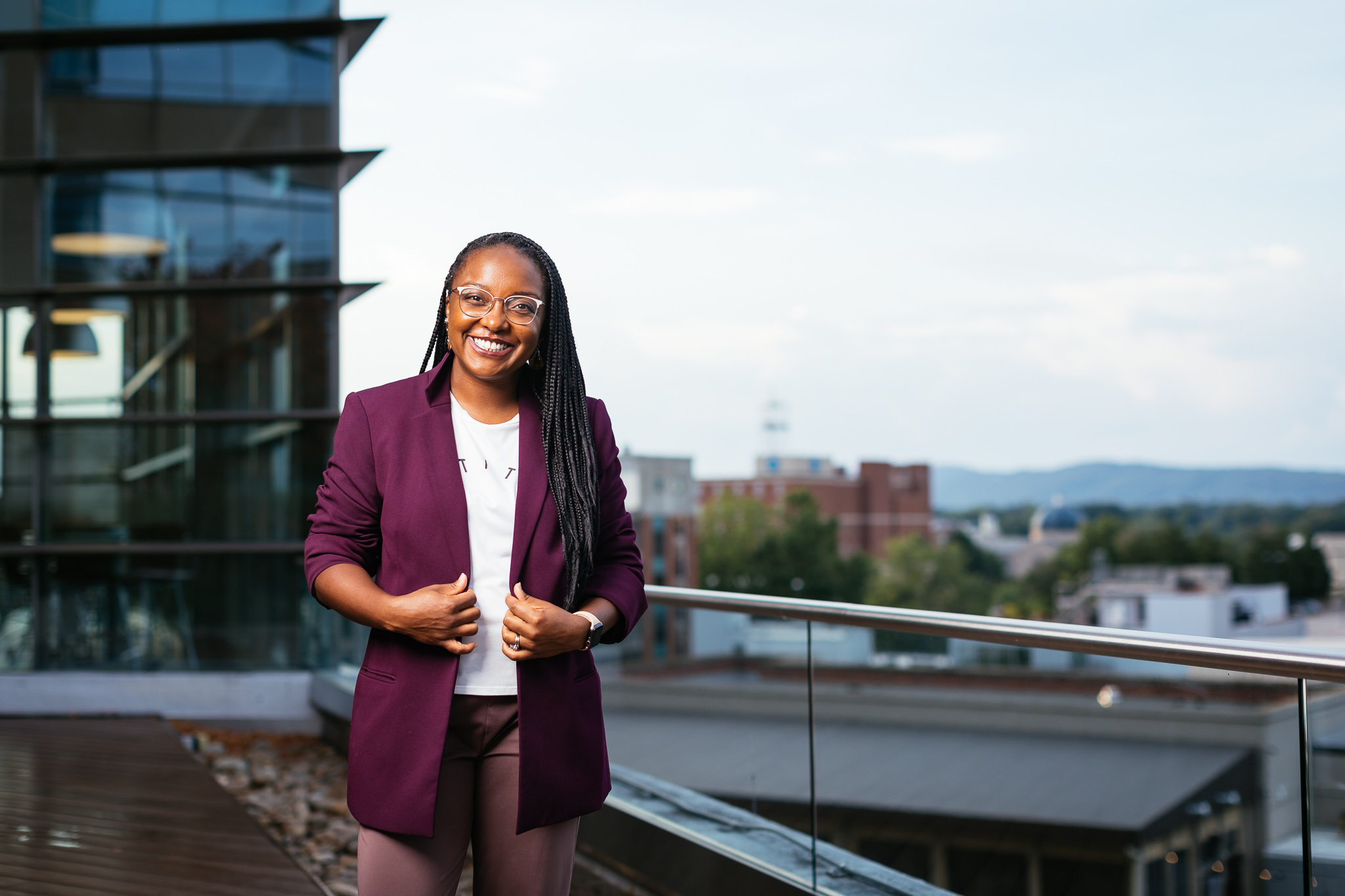 An award-winning attorney, accomplished academic, and successful entrepreneur—Shontavia Johnson, Associate V.P. of Entrepreneurship & Innovation at Clemson University, is actively changing the entrepreneurial landscape of South Carolina and the world at large.

Although a cursory glance of her resumé might display a somewhat disjointed journey— if you dig a bit deeper you’ll notice everything Shontavia Johnson has pursued led to what she does now. “Everything I’ve done has a common thread of wanting to make the entrepreneurship ecosystem more accessible and diverse,” she says.

While success has certainly been a driver throughout her career, her biggest motivation has always been, “How do I open the door for more people?”

However, as you can imagine, disrupting the widely accepted norms within the business, legal, and academic communities isn’t always comfortable. Still, Johnson explains with an infectious enthusiasm that she possesses a unique passion for supporting entrepreneurs who are historically underrepresented and underserved. “This can be anyone from rural farmers to people with historically marginalized racial identities. The innovation landscape needs to widen. A lot,” Johnson states.

And despite cultural pressures as a Black woman to always say yes, she is quite intentional about every opportunity she takes. “I actually get a lot of flack for this! I say ‘no’ more often than I say ‘yes,’ and that can be tough for some people to accept.”

Johnson’s passion, clarity, and altruism is captivating, but she’s the first to acknowledge that those traits developed with time and experience. Reflecting on her winding journey, she looks back to her original career choice admitting, “I was motivated by money. In law school, people told me intellectual property lawyers made more money and had more opportunities for success.” Although 80% of intellectual property lawyers are male and 90% are white, Johnson’s undergraduate degree in Biosystems Engineering from Clemson set her up for success in the field—and she fearlessly jumped in.

Fresh out of law school, she found herself working at a big law firm making more money than most people in her family, but there was something inside her that knew she wanted to venture out to other things. “Sure, the work was interesting and some of my colleagues were great, but it didn’t feel like the thing I was meant to do. Every single day I felt the pull towards something else,” Johnson says.

She admits there was a specific mantra that continued to ring in her ears—one she heard from Rachel Robinson, founder of the Jackie Robinson Foundation, whose generous scholarship played a key role in Johnson’s ability to pay for college. That mantra, originally spoken by Jackie Robinson but shared far and wide by wife Rachel was: “A life is not important except in the impact it has on other lives.” It’s obvious that Johnson has taken the phrase to heart.

Despite all the relational and financial pressures around her, she made the bold decision to follow her passion. “I quit my job, cut off all my hair, ended my long-time relationship, and traveled to South Africa for the summer to study under Justice Zakeria ‘Zak’ Yacoob, who was appointed by Nelson Mandela to serve on South Africa’s Constitutional Court—their equivalent to the U.S. Supreme Court,” Johnson recalls.

Immersing herself into a completely different culture and perspective on law, Johnson’s mindset was transformed and her passion was sparked. “I learned how many South African lawyers used their careers to make law and society more accessible to others,” she says.

Returning to the U.S. a few months later, she was determined to apply what she learned to her own life. Johnson decided to begin teaching at a law school, and in doing so, taking a $100,000 pay cut. “I didn’t think I’d be the next Thurgood Marshall,” she laughs, “But what I could do was support a more egalitarian society by simply sharing my knowledge with people who had maybe never even heard of intellectual property law—the creators, artists, musicians, whoever needed it.”

As a young, Black woman in America, Johnson faced many obstacles as she moved forward in her pursuit of empowering women and people of color to create generational wealth through law and entrepreneurship. And while doing so, she also uncovered additional impediments outside the legal realm, such as a lack of access to capital. Recognizing that funding is a significant challenge for South Carolina’s entire startup community, especially for women and people of color, Johnson continues to advocate for change while serving as Associate V.P. of Entrepreneurship & Innovation at Clemson University.

“I believe that truly solving these inequalities starts at the most foundational level of how we define entrepreneurship. When it’s limited to high-tech, venture-backed startups, we ignore large populations of people with great ideas,” she states. Johnson believes entrepreneurs in rural states and agricultural areas are often underrepresented and undervalued in discussions. “Maybe we can invite wider groups of people to the table. Why not also include someone in the conversation who is solving a local problem in a small town of 500? That kind of innovation is still valuable and can be scaled.” she says.

Over the course of her career, Johnson has played a key role in the success of hundreds of entrepreneurial ventures around the globe and plans to continue doing so in the years to come. With every entrepreneur, she pushes them to embrace two mindsets in order to propel their success. First, every entrepreneur must “Fail Forward” in order to keep growing. Recognizing that while it’s easier for well-funded established businesses to accept failures as learning opportunities, it’s equally—if not more important—for aspiring entrepreneurs.

“I’m kind of tired of the story of the man in his garage who quit his job and became an overnight unicorn, and blah, blah, blah,” Johnson quips. “I want to hear more stories about the people who continued working a full-time job while relentlessly pursuing a startup they believed in for years despite failures and rejections.”

According to Johnson, the second essential ethos is, “Bloom where you’re planted. Even if you don’t have access to lots of funds, your first venture fails, or other obstacles are in your way.” One of her life’s passions is to see people pursuing growth and opportunities to serve their communities with what they have right now—not waiting for a perfect moment that may never come. “It’s a disservice to yourself and to the world to simply sit and dwell on what you don’t have, versus working with what you do .”

Despite the obvious discrepancies in opportunities and access that still remain for many people in America today, Johnson looks ahead with hope and action as she aspires to see our world improve accessibility to entrepreneurial success for those underserved populations through education, funding, and a shift in mindsets. “I believe you could truly change the world with some of the ideas coming out of rural South Carolina… And I will champion that cause!”

Follow Shontavia and her story on LinkedIn and on the web at News.Clemson.Edu

« Scott Millwood on The Hidden Value of Prototypes
20 Pros and Cons of Building a Mobile App vs. a Web App »

Beyond the Hustle: Jenna Spencer on Building a

Geoff Wasserman On Identity, Investing In People,  And
prev next