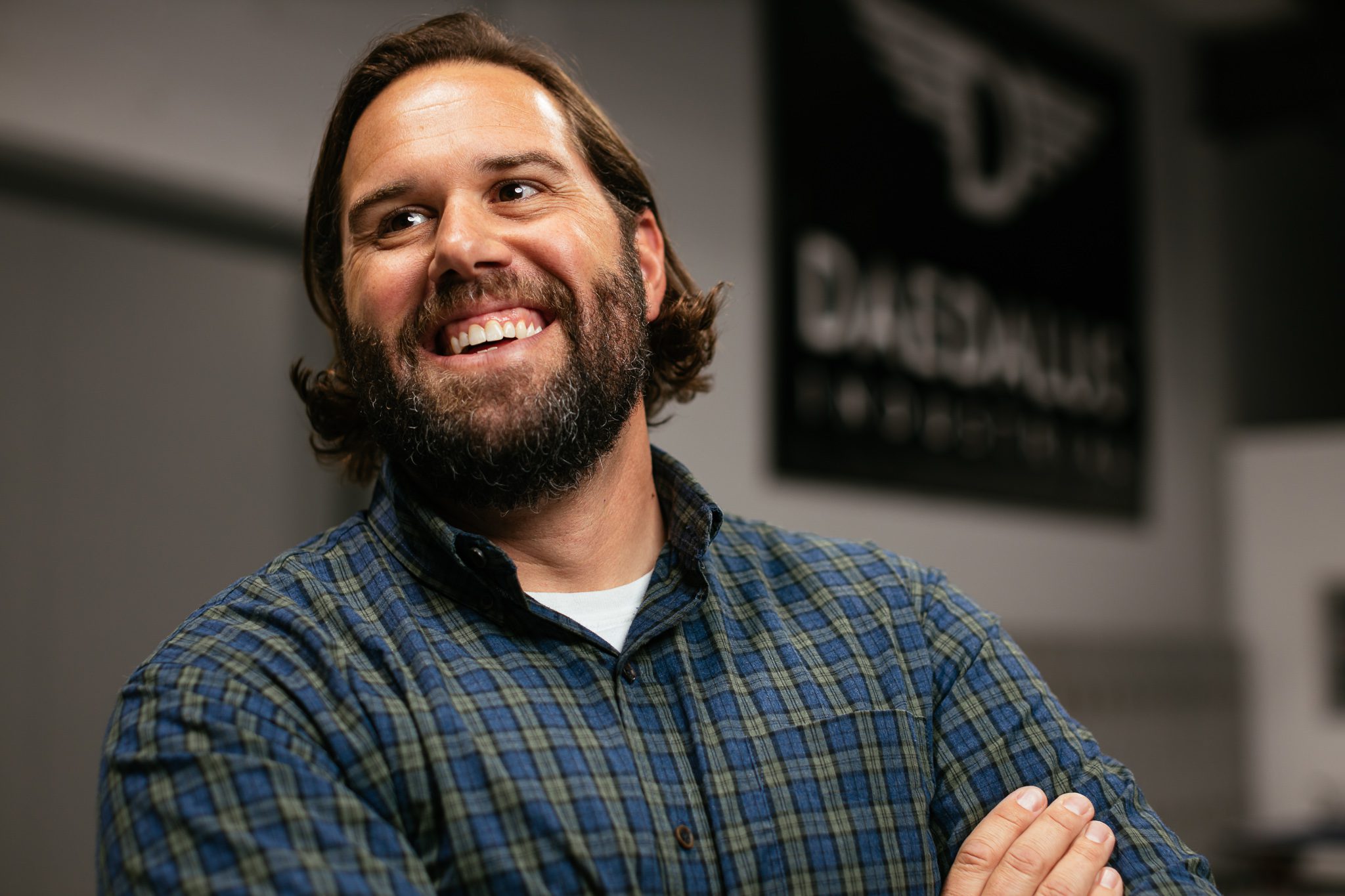 Not many people can say that they were kicked out of college with more credits than it took to graduate. But for Austin Jones, Co-Founder of Daedalus Industrial and President of Materials Management, Inc., the path to entrepreneurship was anything but typical.

Jones, who describes his younger self as “your prototypical smart but lazy guy,” spent his undergraduate years at the University of Florida partying and having fun. His grades dipped lower and lower until finally he was asked to leave on account of poor academic performance.

Not having any sort of degree or direction, Jones soon found himself working at a cement mill doing what he describes as “backbreaking physical work.” He was paid well, but he knew he was squandering his potential. “I felt like a big failure,” he explains. “I had never experienced a failure at quite that grand of a scale.”

That experience was all it took to show Jones that he needed to get his act together and go back to school to finish his Bachelor’s degree. With more motivation than ever, he switched over to a 5pm-5am shift at the cement mill and spent his days studying and going to class (with just a few hours of sleep in between).

“I was so driven at that time by proving to myself that I wasn’t a failure. I didn’t care that I didn’t have a social life,” Jones says. “All I cared about was going to work, making money, and finishing my degree – that’s it.”

It was during these formative years that Jones started to develop what would later become one of his most defining personal philosophies: there isn’t just one path to success.

“I was sitting there thinking that I had missed the ‘target.’ I had missed it pretty freaking big,” Jones says. Little by little, however, he started to see that perhaps finding success isn’t about shooting a target.

Today, Jones tells his employees that success is like summiting a mountain. “There are a lot of different paths you can take to go up and down the mountain, and a lot of times you turn and go the wrong way and end up going backward – but you’re not going to accidentally end up at the top or bottom,” he explains. “As long as you keep taking steps, you eventually run out of mountain. You either reach the top, or you quit.”

For Jones at age 22, quitting wasn’t an option. He finished his degree and got a salaried job, which soon afforded him the once-in-a-lifetime opportunity to move to Greece for an international management program. Before long, however, another path revealed itself.

Jones’s uncle passed away, and at the funeral, Jones’s grandfather asked him if he would consider taking his uncle’s place in running the family textile business, Materials Management. The company was struggling, and Jones was tasked with fixing it.

“All of the sudden I was sitting on two options: go and move to Europe and travel the world, or go work for a failing family business hoping I can fix it,” Jones said. “So obviously I chose the really risky, uncertain path, dropped everything I knew, and moved up to South Carolina to try and figure it out.”

Over the next six years, Jones was able to change the business model and turn the company around. After he had accomplished what he came to do – fix the company – he found himself getting bored with the job and itching for something new.

Searching for that next step, he began dabbling in real estate, started a paddleboarding company, and even went back to the University of Florida to get his Executive MBA (and ended up graduating #1 in his class).

Nothing was really sticking until 2017, when Jones was presented with an amazing real estate opportunity: the building next to Materials Management – which was occupied by a control panel company – became open for lease with a purchase option. He jumped on the opportunity and started talking to the private equity firm that owned the control panel company about signing a sub-lease so that he could exercise his purchase option.

It was all bright skies ahead until the private equity firm informed Jones that they wouldn’t be signing a sub-lease because they were about to shut the control panel company down.

Jones was in hot water; his lease started in two weeks, and he didn’t have any tenants to help him pay the lease. Plus, it was mid-November, so he didn’t have much time to figure things out before the holiday season.

That’s when Jones had a stroke of genius – he realized there was no way the private equity firm would be able to move all of the assets in the building in just two weeks’ time, especially with the holidays around the corner. He made them a “laughably low” offer for all the assets in the building and told them that they had two weeks to accept it. If they declined the offer, he would give them only two weeks to move all of their machinery, equipment, and personnel out of the building. “Oh and by the way, enjoy your holidays,” Jones added.

The firm accepted Jones’s offer. He had fallen upon the next big thing.

Jones and his business partner Buff rebranded the company to Daedalus, and they were off to the races. Neither of them knew the first thing about automation, but they did know how to hustle. Trying to figure out what in the world they could do with their newly acquired panel shop, Jones reached out to a colleague in Virginia, Mike, who worked for a large data center business and asked him if there was anything Daedalus could help them with.

Mike did, in fact, have a project his company needed help with, and he invited Jones and his engineering team (who didn’t exist) to fly up to Virginia to pitch their services. “He was telling me what kind of a team the project would require, and I was just feverishly writing down everything he was saying: controls engineer, electrical engineer – yup, we have all of those guys!” Jones laughs.

Jones and Buff started feverishly reaching out to their contacts. They called engineers at big companies like Jacobs and told them that Daedalus would pay them to take a few of their holiday vacation days to come help them present to the data center company. In just a month’s time, they had built the makeshift dream team, and they were off to Virginia to pitch.

Much to Jones’s surprise, his team was offered the job. Mike’s team had figured out the hiring scheme, but they respected Jones’s creativity and knew it would be a necessary trait for the project at hand, which would be the first of its kind.

Daedalus was tasked with building a device that would automate building control system upgrades, which is normally a time-consuming job that is hired out to expensive, over-qualified engineers. In partnership with Mike’s company, Daedalus created the first-ever “Building Management System (BMS) Pod,” a shipping container filled with system controls and upgrades that could run all of a building’s updates in one fell swoop.

The pilot project was a huge success. Daedalus’s BMS solution saved their first client over 50% on building upgrade costs, and all they had to do was place the Pod on the top of the building and plug it in. Needless to say, Daeulus’s BMS concept has completely revolutionized the world of building controls management.

Now, because of a patent they were recently awarded, Daedalus is the only company in the world that can create and implement containerized building management systems.

“We’re starting to do work with some really big players, and it’s all because we hired a few people for a week and flew to Virginia,” Jones says. “I just keep putting one foot in front of the other and surrounding myself by people way smarter than me.”

Follow Austin and his story on LinkedIn, or find Daedalus Industrial on the web at DaedalusIndustrial.com.

« Corey Staples and Kiana Mincey, Creators of Switch, Share The Ups and Downs of Developing Your First Big Idea
How Much Does it Cost to Make an App? »

Didi Caldwell on How Radical Optimism and Occasional