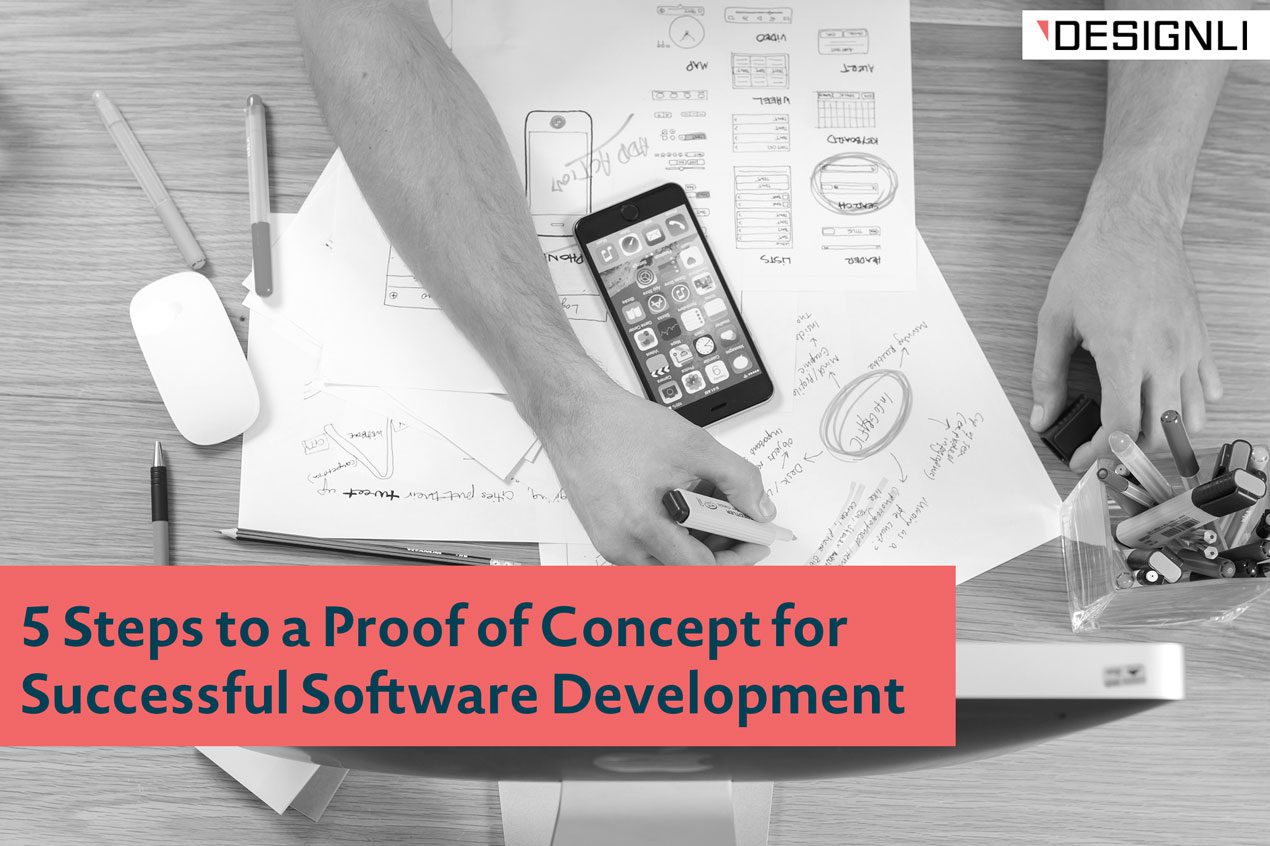 This article dives into answering the most common questions about a software proof of concept, including why you need one and how to go about writing a PoC.

Forming an idea for a new piece of software is energizing. Brainstorming possibilities and envisioning potential inspires team members to create something new that solves a problem. Ideation is exciting, but without putting your idea through its paces, you may not end up with the product you expect.

Is the idea practical? Is it feasible? Will the users actually want to use it? What resources will be required to build it? These and other questions can all be answered with a proof of concept.

What is a Proof of Concept?

Proof of concept (PoC) is creating evidence and documentation about the feasibility of an idea. It outlines how the idealized product or service would become market-ready, how it would function, if it’s needed, and who is the target demographic.

While a proof of concept has several applications in different fields (ranging from marketing to medicine), when it comes to software development, it applies to a specific process. For software-specific ideas, a PoC is an act of determining if the software can be built in the real world, what technologies should be used in development, and whether the software is likely to be adopted by its intended users.

Why is a Proof of Concept Important?

In creating a proof of concept, you are essentially laying out on paper why your idea would be successful in the market. Think of it like a business plan for a software idea. Though the inclination to skip making a POC can be tempting, it’s important to fully flush out your idea for a few reasons.

Why Do You Need a Proof of Concept?

Although nearly everyone who comes up with an idea is convinced it will work, creating a proof of concept to test your idea will ensure you arrive at the best version of it and will save you time and money in the process. Laying out every detail about your idea will help highlight gaps in your product plan that you might not realize exist.

A proof of concept is also free, so it’s a low-stakes way to test your idea with other people. Whether you’re adding new features onto an existing software or whether you’re building something new completely from scratch, a proof of concept will ensure that you take the fastest, most direct route to success.

We’ll use the idea of a dog grooming app as an example proof of concept. In this case, the PoC would identify what this app will be adding to the mobile world of booking dog groomers, which users are likely to request grooming services through it, expected problems that might arise in developing it, and the future plan to monetize this app.

What is the Difference Between Proof of Concept, Prototype, and MVP?

If you’re new to software development, these terms can seem similar and confusing at first. Though they’re all involved in the early stages of creating a new software product, they represent three distinct phases.

Proof of Concept vs Prototype

These two terms are often used interchangeably, but they represent two different phases of development.

Proof of concept always comes first. Think of this like a word document, where you have written down a fully formulated idea. After you have this document, confirming your suspicion that your idea is a good and needed product, you move on to the next step- prototyping.

A prototype is the first, very basic iteration of your software idea. It takes the words from the proof of concept and brings them to life in a tangible product. A good example of this is software wireframes. Another instance could be if you get a design mockup that allows you to visualize the user flow and look of an app that’s to be created.

To illustrate the point, if your PoC outlined an idea for an example wedding planning app, then your prototype could be a program demo that allowed you to click through the basic screens of that app to get a better feel for what the final product will become.

Creating a Minimal Viable Product (MVP) is the next step that comes after you have a prototype. This is the simplest, most stripped-back version of your software idea, yet it still retains enough features to be released to the general public for actual use. Minimal Viable Products are a common topic in software development with a lot of content surrounding them, so you may want to learn more about the pros and cons of creating an MVP.

How to Write a Proof of Concept

There is not a cut-and-dry method for writing a proof of concept. The rules aren’t strict like they are for other written documents, like research papers, which must all follow the same outline of intro, methods, and conclusion.

Instead, it’s important to make sure specific key topics are covered, however that may be. A proof of concept is a living document that can be updated as you have new thoughts and get fresh feedback from people who read it. For developing software ideas, a PoC should discuss the following:

It only makes sense to put time and money into building a product if people need it. Maybe those people are the company’s employees, who need to improve their productivity. Maybe they’re a new market the company isn’t currently serving but could easily reach. Whoever they are, you need to know that your software will meet their needs.

Before you begin building the software, you’ll want to be crystal clear on the pain points your target audience is experiencing. You don’t want to guess what these issues are or assume you know without actually talking to a representative sample of people in the group.

You don’t have to talk to hundreds of people at this point — just enough that you start hearing the same concerns repeated. As you interview potential users and stakeholders, be sure to ask about the implications of each pain point. You’ll want to learn both the business impact and the personal impact of each one to create a prioritized list. Eventually, you’ll see patterns and common threads emerging. You may be surprised at what you don’t hear in these interviews as well. By the end of this step, you’ll have a list of specific needs and goals that the software should solve.

Step 2: Map Pain Points to Solutions and Get Feedback

This step involves brainstorming ways to solve each of the pain points you identified in the first step. There will likely be several ways to solve each issue. After your brainstorm, you’ll evaluate each possible solution to determine how it stacks up in reference to cost, competition, timeline, technology challenges, etc. When this process is completed, you should have a clearer idea of which solutions to include in the final product.

Once you have this list of solutions, go back to the users and stakeholders you initially interviewed and learn their reactions and responses to the recommended solutions. Describe how you envision the product working, and ask for their feedback. This input will provide you with valuable insight as you move forward.

What happens after Proof of Concept?

Step 3: Prototype Your Solution and Test

Your next step is to create a prototype that wraps your solutions into a rudimentary product that you can use to test with those you interviewed previously. This prototype should have the expected feature set and UI/UX.

Once the prototype is built, test it with your interviewees for additional feedback. Record their use of the product to track how intuitive the interface is, and find out if you overlooked any important functionality.

An MVP is different from a prototype in that it’s a fully-functional solution that you can put out into the world for use. While it will include only the most-important features that are essential for solving the primary pain points you identified, it should function on the user’s side just like the final product.

The MVP gives you the ability to test the product beyond your small group of interviewees, to a wider group that’s more representative of your market or audience. It offers an opportunity for more feedback that will tell you if the product in its current iteration resonates with users and stakeholders.

From all of the information you’ve gathered in each of the previous steps, create a roadmap that describes what you’ve learned and outlines a recommended step-by-step process for building the product. Think of this roadmap as a set of blueprints for constructing a building. With this roadmap as a guide, everyone will be kept on the same page through product development and will have a clear picture of what the end goal is.

Main Takeaways for Creating a Proof of Concept

At each stage, we want to stress gathering as much feedback from your intended audience as possible. The more information you know about what your users actually want, the sooner you can focus on those features, cut unnecessary ones, and save yourself iteration time and expenses along the way. You can continue to fundraise at each point, using these supporting documents to show investors the product’s progress.

Many startups fail because they skip over a proof of concept, convinced their idea is a unicorn, and rush to go straight to market. Taking some thoughtful time on a PoC is a great first step to getting you on the way to a rewarding market launch.

Want to talk through ideas for your new software solution and explore a proof of concept? Get in touch.

How to Craft a Unique Value Proposition that

Best Practices for Researching Your Competition
prev next